I spent a large portion of Christmas day grading exams for the university.  The grades are due today and I still haven't finished.  Which means I'll begin assigning grades arbitrarily.  89...67...92...77...done!   (Just kidding, of course.)

This semester I'm teaching academic writing, and I really hate grading the exams.  70% of the exam is an essay, meaning I have to read 120 horrendous essays.  The students tend not to pay attention to subject-verb agreement or pronouns, so I end up reading things like, "Cambodian language have a lot of vowel, so they are difficult for foreigners to study."  In context, clearly the student was not asserting that the vowels are difficult to study.  She wanted to say that the language is difficult to study.  The sentence should have been something like, "Because the Cambodian language has a lot of vowels, it is difficult for foreigners to study."  This is a comprehensible example; however, there are a lot of times when the sentences are so ambiguous that I just have to scratch my head and shrug. 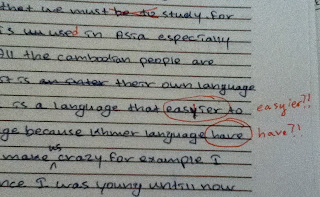 Since I have two weeks off work and absolutely no money, I've decided to devote some quality time to studying Khmer.  I have not really been studying it with any regularity, just picking up words here and there.  With Boyfriend's help, I am now learning to read and write.  I have to speculate that the Khmer writing system was invented by someone keen on walking in circles and bumping into walls.  First you have the consonants (which are impossible to pronounce correctly).  Then come the sub-consonants, which go under the consonants.  Then come the vowels, which can be placed on the left, right, top, or bottom of the consonants.  Not to mention the independent vowels and the numerals.  It's a veritable nightmare.  For example, ភ្នំពេញ (Phnom Penh). ភ្នំ is Phnom.  The character in the middle makes the p sound, the little squiggle underneath makes the n sound, and the circle on top is the om (nom nom nom).

I don't understand how writing Penh takes three separate letters, but Phnom can all just be crammed into one.  Oh, Cambodia.  How you baffle and fascinate me.

Posted by Hannah at 8:05 PM No comments:

The view from my window

Goal #1 for 2012: buy a camera.  My iPod does not take fantastic photographs. 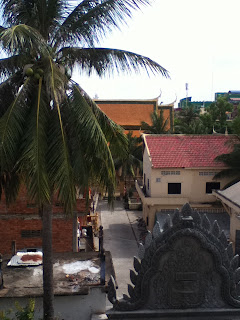 Posted by Hannah at 6:28 AM No comments:

I'm Hannah. I'm an English teacher. I live in Phnom Penh, Cambodia with Boyfriend and Cat. I think K-pop is disturbing and hilarious. I like to read, write, and study languages and religions. 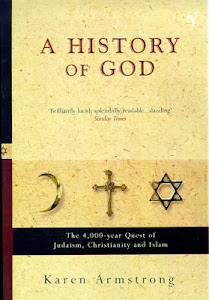 A History of God by Karen Armstrong